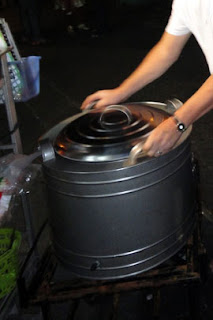 Seen at a street restaurant in Bangkok a beer-fridge which operates very fast and needs no electricity. I don't know where they are manufactured, but I guess they are specific for South-East Asia.
At first glance the fridge looks like an old fashioned washing kettle, but inside is a double walled cylinder with a capacity of 30 Liters of water (8 Gallons), add a a lot of salt, making the water more salty than seawater, then add ice cubes.
Inside the cylinder is a rotateble rack accommodating up to ten big bottles of beer. (Of course you can chill softdrinks too.)
Put the lid back on, grab the handles and stir the inner rack firmly back and forth a few times every couple of minutes and in no time the bottles will be chilled that much, that they will come out icy white.
As far as I understand, the chemical process of dissolving salt will withdraw heath from the water and thus from the bottles, making them to cool down. The melting ice-cubes will accelerate the process.
According to the owner of the restaurant the device costs 3000 Baht (€70,- or $90.-).
The device seems to function very similar to a so-called pot-freezer, which used only ice and salt and was applied to produce ice-cream in pre-electric times. Although this method was know for longer time, the first patent was granted to Nancy M. Johnson of Philadelphia in 1843. Using a lot of water the 'Asian' version functions slighlty different and of course the application is different as well; nobody would like iced beer.
In the old days ice was harvested in winter and stacked as big blocks or in summer, ice was being shipped from colder places, and stored in huge wooden chests or spaces, buried mostly underground.

See also: Home made ice-cream.. Without a refrigerator!, The Ice-Cream Ball, Graeter's Ice Cream.
Posted by I-nomad at 16:49