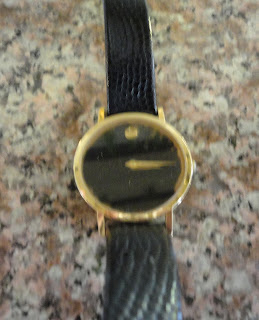 Last month my Movado watch was damaged by seawater coming in. Since it's being designed in 1947 under Bauhaus influence and is on permanent display in the Museum of Modern Art in New York since 1960, it is often being referred to as the museum watch.
Movado seems to be Esperanto for "always in Motion" and in fact my watch still is in motion indicating the correct local time, the adjustment pin being corroded I'm not able to change the time anymore.
According to the specifcations it could stand at least 3 meters or 30 meters under water, I forgot.
My previous watch, which was exactly the same model, lasted for 19 years and I never took it off, and I regarded it as part of my body, until one day the same happened to me, salty water came in, since the rubber or leather inside around the adjust button will wear out making it possible for water to drip in. The model is not being made anymore, but on Ebay second hand watches or old stock from the USA are available, but part of them being used, they might have the same problem. I bought this one on Ebay last year and it looked like it had never been used before, not a single scratch but this time the life span was very short. Maybe after 20 years the time has come to get a brand new watch, sniff.
Posted by I-nomad at 15:22