Salò or 120 minutes of shopping

The city of Salò is situated North-East of lake Garda. Today I visited Salò for an hour or two.
Salò and surroundings formed an independent fascist republic during the end of the second world war, called the Republic of Salò. It was the last stronghold of Mussolini and his fascist government, the South being liberated by the Allied troops in 1943. In fact Salò was a puppet state created by nazi-Germany.
Although some people think the republic lasted 120 days, due to Passolini's infamous movie; Salò, or the 120 days of Sodom, it lasted in fact 586 days, ending three days before Mussolini was killed by the partisans.
Now Salò has turned into an elegant tourist place, but the pictures below, taken in a souvenir shop, are showing that some people are obviously still proud of the achievements of Mussolini.


Note: in Germany selling and buying these items would be regarded as a criminal offense. 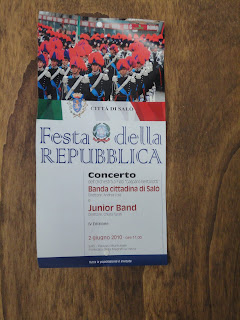 It makes you wonder which republic are the people celebrating for; Italy or Salò?
Posted by I-nomad at 04:52