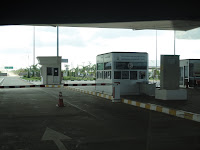 The border between Laos and Thailand
at the friendship bridge II over the
Mekong river between Mukdahan and Savannakhet
As the previous two articles might suggest, I was in Laos the other day to perform my periodical visa-run. A visa-run is slang for extending your visa by crossing the border, often without even visiting the other country. Many foreigners, after entering another country, get in the queue to return straight away. As Thailand allows foreigners flying in to stay 30 days in their Kingdom, I do a visa-run in order not to be fined 500 Bath/day (12 Euro or 15USD/day) or worse; being picked up by the police and expelled from the Kingdom. Coming here I assumed it would be easy to extend my visa locally, just showing that I had a means of living. But how wrong I was, I tried to request a visa once, but for 1900 Baht (46 Euro or 58 USD) and a photo and traveling 4 hours back and forth, I was granted to stay eight days more. So in Thailand the following rule applies; once a tourist always a tourist. Requesting a visa or visa changes can only be applied for at embassies or consulates abroad and it will take you some time and paperwork. As of December 2008, overland or even overseas trips will give you a mere 15 days extra, whereas flying still will grant you another 30 days.
During my stay here for six months, I did a visa-run five times; three times by airplane and two times overland, so don't believe internet stories that will tell you you can do that only two times in 90 days or three times in 180 days, that was a temporarily measure after the military coup in 2006. In the mean time regulations for expats and foreigners staying here longer have relaxed. I did enjoy Laos, but it becomes time to request a proper visa abroad. By the way Laos is the only country I've been to, where you pay an entry fee of 1500 baht (36.50 Euro or 46.38 usd) and an exit fee as well, I believe it was 200 Bath or so or I was being cheated.
Posted by I-nomad at 20:06