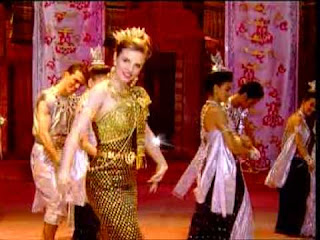 Ever heard of Christy Gibson? She's a famous singer in Thailand specialised in the Isan/Laos style of music called Mor Lam and Luk Thung Prayuk, which is certainly not the easiest choice to make. Christy or nicknamed Kitty by her fans is born to a Dutch mother and British father, but moved to Thailand when she was six years old. Nowadays she's sings together with the Swedish-British singer Jonas Anderson who came to Thailand when he was nine.
I guess both Christy and Jonas are school examples of Farang-integration in Thailand, although both singers seem to be members of a strange Christian sect called Family International, infamous for having a history of child-abuse and other sexual scandals. Visit the joined website of Christy and Jonas here.