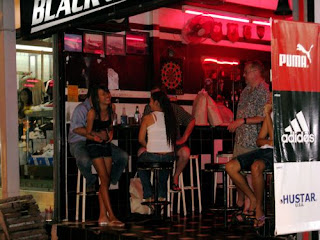 Various things about Thai slang have been written, but so far I didn't come across a topic dealing with slang terms or words used by foreigners or expats living in Thailand or visiting Thailand frequently.
From what I learned until now, I compiled a small list of slang terms and phrases used for inter-farang or farang to Thai as well as Thai to farang communication. Some terms or phrases are also used amongst Thai themselves.

Balloon chaser - To be out for the free food at (birthday) parties held in bars.
Buffalo [is] ill - A Thai girl/woman asks her foreign partner for more money, but has doubtful reasons about the need for it.
Butterfly - A person having multiple (consecutive) relations, used mainly in Thai/Farang communication. (Originating from Japan in the 50's from Puccini's opera Madam Butterfly)
Cinderella - Generally referring to an Isan lady looking for or finding a foreign partner.
Kaput - Broken, A German word, somehow introduced into the Thai language.
Koh Phi Phi / Go to Phi Phi island - Take a pee.
Pattaya/Patong/Bangkok/etc. tatoo - A scar from a motorbike accident.
Pick-up some roadkill - A foreigner, often a sex-tourist, looking for or finding a street prostitute. Used outside Thailand as well.
Same, same but different - Used throughout S-E Asia for foreigner/local communication to identify something which cannot be classified because lack of knowledge of the language spoken.
Tanglish - Broken or badly pronounced English spoken by a Thai person.
Thai time - A delay when making an appointment with a Thai person and he or she shows up or is ready far later than is customary in Western culture.
YKK - Zip your mouth up (named after the Japanese zipper manufacturer).

This list is far from complete, more examples anyone?
Posted by I-nomad at 16:29