Europe for fun, Thailand for free? 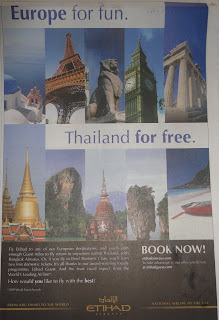 An advertisment seen today in the Bangkok Post by the national United Arab Emirates airlines Etihad.
Perhaps for people of the UAE Thailand seems almost for free, but so far the tourist-industry in Phuket had a bad high season this year. Phuket usually receives a lot of European visitors. But besides non-Euro countries like Norway, Sweden, Denmark, Zwitserland and the UK, many Euro country tourists seem go elsewhere this time and if they come they spend less money than usual, so I was told by several shop and restaurant owners, which see their income drop in comparison to last years.
This year besides Europeans from the non-Euro countries, I saw a lot of Arabs, Russians, Chinese, Japanese, Korean and even tourists from countries like Argentina and Mongolia.
Of course faithful visitors are the Australians and New Zealanders who spend less money for an average holiday here than they do in their own country.
Since September last year the Euro has dropped with 20% from almost 50 Baht for the Euro to 39.4 now.
After Greece, Spain, Portugal, and Italy negatively influenced the Euro, the recent Irish crisis does no good for the Euro-zone economy as well, so the Euro will need a long time to climb up again, I guess.
Posted by I-nomad at 15:22