First flying lesson over Phuket with an ultralight airplane

I didn't know it existed, but Phuket has a new second small airport called Phuket airpark intended for recreational and in the future business flights. Also it includes a flight-school for ultralight planes. Actually it's the third airport if you take in account Patong Beach Airport (PBS), which is I believe merely a waterlanding strip, not very much in use now. The intention is to make Phuket Airpark an American style village like some areas in Summerland Key, Florida, whereby everyone can park his private plane under his house.
Most apartments will have an man-made created seafront view.
An apartment as depicted below will go for about ฿2,14 million (€50.000/$69.000). But if you read my profile this is not my peace of cake.
To just fly or have a first flying lessons, you don't need to invest anything except a fixed fee, so I limited my investment to taking a first lesson with an ultralight two-seater and enjoyed it very much.
Depending on your skills, the lesson includes steering on the ground, take-off, various manoeuvres in the sky, like circle downwards, upwards and landing. The price for one lesson or one flight is ฿7.500 (€179/$244) and takes about one hour.
P.S. The in-flight pictures were not taken by me, but by a friend because I was too busy with the instruments. 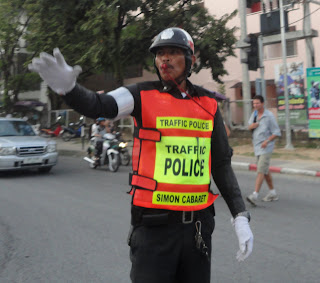 Seen today in Patong, Phuket; a traffic-police officer advertises for Simon cabaret, a famous transsexual show and tourist attraction around here. On one hand it shows how tolerant Thailand is towards the phet ti saam (third gender). On the other hand ladyboys, depending on how feminine they are, are being dismissed from the army for having a mental disorder, reducing the chance for senior positions and getting bank loans, although talks are going on now to change this disrespectful stigma.
(Update 2-4-2011: The stigma has been lifted; one is now dismissed for having minor defects like a problem with the right small toe. No kidding!)

Thailand has the highest percentage of transgenders and transvesties in the world, second being Iran.
In Iran's Moslim world a full operation is the only way of gay expression apart from being hanged. 50% of the costs of a sex-change is being paid by the government. In 1963, Ayatollah Khomeini wrote a book in which he stated that there is no religious restriction on corrective surgery. Later when he became leader he endorsed this policy. For the full article see: Transsexuality_in_Iran.

To whom it may concern: Don't tell I didn't warn you 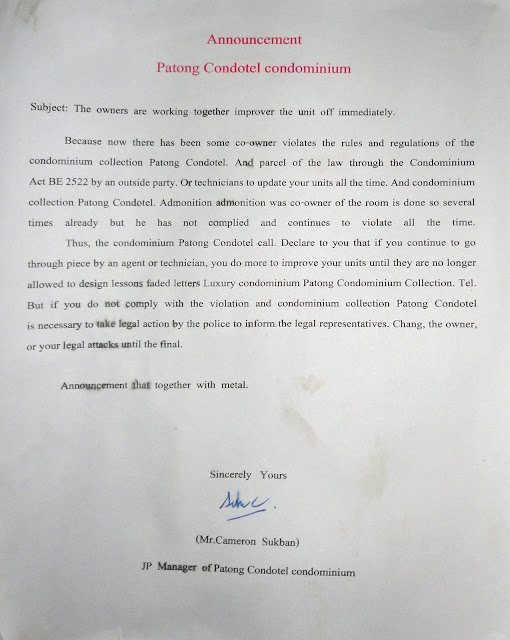 Seen next to the elevator door on the ground floor of my apartment building in Patong, Phuket.
From what I understand from the Thai version which was translated for me (for those mastering Thai, read it for yourself here), an owner of several apartments in the buildng is violating regulations probably by changing the layout without permission and using construction workers other than those assigned by the owner.
The last sentence looks a bit scary: "Announcement that together with metal"
Does that mean punishment will be carried out by using an object made from metal?
In the Thai version however, it reads something like: "Hereby everybody is informed". I have seen funny things from Google translate, but probably even they wouldn't be able to come up with such an interpretation.
Posted by I-nomad at 10:44 30 comments 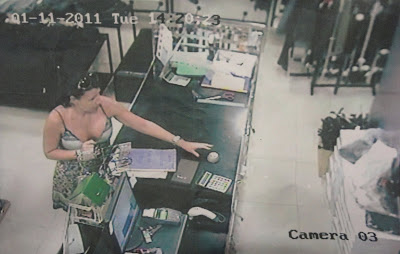 Shoplifting is a big problem in Thailand. In a previous post I mentioned last year Thailand ranked no.9 in global shoplifting. On the photo taken last week in a fashion store called "ext" in Jungceylon shopping mall in Patong, Phuket, an unknown woman, probably of Caucasian origin, is stealing a so-called detacher from the counter. Detachers are used to remove electronic security labels. This type of equipment is mostly used in fashion stores. Once getting hold of such a device it's easy to go out for unnoticed 'proletarian shopping' and quickly remove the security labels in the dressing room. For the staff of a fashion store it's very difficult to check when a potential client enters one of the dressing rooms with for example three fashion items and comes out with two and one hidden in their bag after gotten rid of the label.
Anyone recognising the lady on the photo is requested to contact the tourism police of Patong, call 1699.
Hopefully the lady will be caught and be convicted, preventing farang's from getting a bad name more than they perhaps already have.

A room with a view

No, this is not a war- or catastrophe-zone, but a hotel and spa located near my apartment in Patong, Phuket. Fortunately I will stay here for the next 9 days only. The photo has been taken last year. How would the hotel refer to rooms at this side? Rubble view or ground zero view? 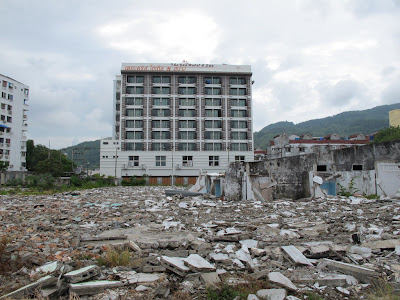 Actually now the situation has become worse, since they are constructing a new building. Obviously the're some deadlines to achieve, since they are working from 7:00 till 24:00. The photo below was shot tonight from my balcony at 23:00. On the left is the same hotel as above with construction view and sound. 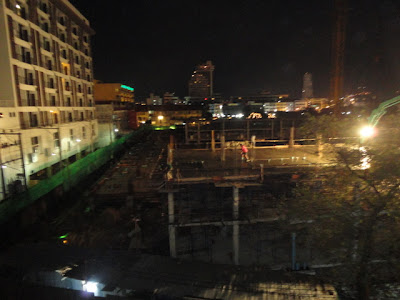 In the witch-hunt for collaborators of Wikileaks, US has summoned the Dutch government to hand over all private information of a man being referred to as Rop Gronggrijp, The request looks clumsy since among other things his ID card on his blog clearly shows that his real name is Robbert. The information to be supplied comprises IP-addresses, credit card and bank info, login codes of twitter and other accounts etc.
According to the US, Gonggrijp is a threat to the national security and is now being called the adjudant of one of the current Wikileaks key figures Australian ex-hacker / whistleblower Julian Assange.
I do believe that Rop Gronggrijp and Julian Assange have a lot in common, namely at young age in pre-internet times they both used to be hackers using a personal computer and a telephone modem. By applying their knowledge and a large human network they feel the urge to not only demonstrate malfunctioning security in confidential information systems, but promoting freedom of speech and publishing information found about injustice as well, originating from a kind of libertarian conviction. Also I believe both have no time and/or have up to date skills to exercise their original hobby, but have become icons in the 'trade'. Rop was and is still often being interviewed in the Dutch media about electronic security issues.
At younger age Rop used to be a so called phreaker, exploiting phone systems with the help of an American PBX (telephone-connection-system) expert and US fugitive, finding weaknesses in the system and publishing schematic diagrams or information to call free charge, starting so-called chat-boxes for free, unscrambe pay-channels or copy magnetic stripes of (bank)-cards, which were published in a magazine called Hack-Tic.
I met Rop and the American one time in the early 90's to develop a commercial  telephone controlled switch/alarm device, using the pager- and telephone-network At the time they had developed a device which showed all info about any pager-message being sent in Holland in real time. Both had long hair and big boots, which raised the eyebrows of our secretary, I remember. Unfortunately the project was discontinued due to lack of funds from the company where I was employed.
Later Rop pushed the only (at the time state owned) telephone company KPN to supply Holland's first commercial and private internet cable to his house in Amsterdam, which took him about one year, in the same year, 1993, he co-founded the first commercial ISP in Holland, called XS4ALL.
In 1997 the company was bought by the original 'enemy' KPN and made Rop a wealthy man.
Because of his mischief in the past, Rop is labeled as 'dangerous' by the US for about 20 years or so.
According to his blog, Rop's only involvement in Wikileaks is releasing a video in July 2007 called Collateral Murder which shows a firefight from a US Apache helicopter over Baghdad that allegedly killed a group of eleven unarmed civilians including Reuters photographer Namir Noor-Eldeen, his driver Saeed Chmagh, and wounded two children among others. Enough to make Rop an eternal enemy of the nation.
Dutch newspapers report that in the recent past he had tried to find hosts for Wikileaks.
Unlike in the times of the Spanish inquisition, we nowadays distinguish so-called white witches and black witches. The term 'hacker' hasn't evolved that much yet; so it doesn't categorize people who are breaking into secured systems or dealing with secret/private info purely for financial gain or people who are doing this merely for public awareness and/or achieving peaceful ideological goals.
We now have to wait to see how much balls Dutch authorities will show towards the US (thanks again for your help to liberating us in WWII) to decline this request which contains errors and is not backed-up by international law.
Posted by I-nomad at 17:59 6 comments