40 countries safe to visit without a Big Mac™

Staying in Vietnam, I noticed there are no McDonald's™, Burger King's or Starbucks here.
A small compensation for the fanatics is that they do however have KFC, Pizzahut and Lotteria (a Japanese McDonald's™).
The map below shows countries which have McDonald's™: 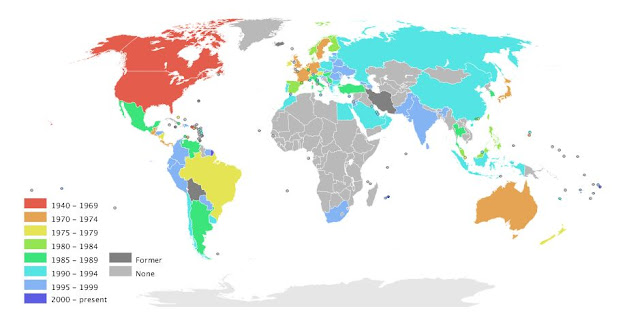 Based on this map, I wondered which countries in the world would be safe to visit and still defy the global village image of the golden arches. Moreover in some countries visiting a McDonald's™ can be dangerous for your health too, because they form an easy and attractive target for terrorists. When I visited Hurghada, Egypt in 2005, just after a large terrorist attack took place in Sharm el-Sheikh, McDonald's™ became the most heavily guarded place in the city. Below is a list of MacAttack-free countries, simply because they have none. The numbers at the right indicates whether the country as a whole is currently safe to visit, purely based on my own judgement from a more or less conservative point of view.

Okay, the last one is a continent not a country, but when identifying a total of 193 sovereign nations as recognised by the UN, adding South Sudan as country no. 194, it means McDonald's™ currently has outlets in 101 countries.
So for the very adventurous few, there are 93 territories for you to boldy go where no Ronald has gone before.
And for the more conservative people under us, 40 countries promise you a safe destination to enjoy a Mac-free holiday.
By the way Greenland, belonging to Denmark is not regarded a sovereign nation, but a huge space to safely explore without taking a McBreakfast™ first.
Do I hate McDonald's™? Not at all! At younger age they often helped me to survive in several expensive cities, like Tokyo, Milan and Zürich.