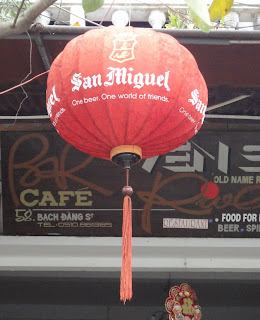 In Asia San Miguel beer is advertising with the slogan "One beer. One world of friends."
Knowing the brand's history, this is quite misleading, since nowadays the world has two San Miguel's using exactly the same logo and lettering.
Originally San Miguel was founded in the Phillipines in 1890. In 1953 they licenced their product to a Spanish company, then called La Segarra. Later this became Spain's no.1 beer brand. In 1983 the original Phillipine company sold it's minority interest, wereby the two were completely separated, which caused that now in Asia and Australia one will drink San Miguel no.1, but in Spain and the rest of Europe however, it will be San Miguel no.2.
Currently I have no info about what you will get served in two America's, maybe you will be asked first.
Posted by I-nomad at 19:20