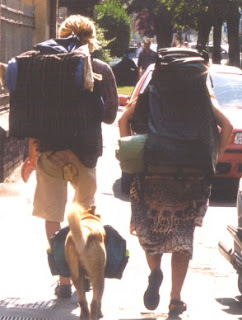 I never fully understood the joy or necessity of backpacking, unless one is traveling via unpaved roads, like in a jungle, dessert or up in the mountains.
In numerous cities around the world I see backpackers often with bags where all my belongings could easily fit in two or three times. What do they toss around in those big bags, 30" flatscreen TV's?
I understand that if you bring a tent, you'll need perhaps more space than I do, but I see backbackers in countries where camping is either not allowed, considered too dangerous, too unconfortable because of the climate or where you can have a roof over your head for the price of two diet cokes in your own country.
Usually coming from overseas you will arrive at an airport whereby it's too far to walk to the nearest city, so again no need for a backpack.
Also backpackers seem to come standard with a one liter bottle of water, to cool themselves down from carrying their heavy load in the excotic sunshine, this doesn't help, since it will make you more thirsty, learn from the Arabs, they drink tiny cups of hot tea or coffee, this confuses the body and will stop it from sweating too much. Be honest, who should know better how to control heat than the Arabs do.

As I understand Buddha wrote: One should not possess/(take) more than one can carry, but backpackers stretch that concept to the max. Unlike in the times of Buddha most roads are paved now and we have clamshell suitcases which offer the following advantages:
1. Clamshell suitcases are more secure than backpacks, because they can be locked and not easily cut open with a knife.
2. The contents is safe from being damaged, eg. when being stacked in say a bus or getting soaked by heavy  rains.
3. The contents will consist for a large parts of clothes which have tiny air holes to keep you confortable and therefore can be squeezed, minimising the size to airplane handluggage standards.
4. When opening a suitcase one has a good overview and things are easy to find.
5. Although you can carry them if needed, clamshell suitcases have a very practical other asset: wheels.

Some hardcore backpackers even have a frontpack, the advantage is that this keeps them in balance and allows them to bring even more unnecessary items from home.
Why go around the world carrying such a heavy load? The most interesting countries have cheap laundry facilities to wash out the smell of your socks out of your shirts, shorts and fleece sweaters, and should your clothes be damaged or worn off, they sell (fake designer) wear for a fraction of the costs of your high-end travel clothing. Minimise what you really need to take with you.

Learn from former milkman Peter Korrel from the Netherlands; in 1983 he completed visiting 195 countries (including some not fully recognised nations) with nothing more than a handbag containing his passport, two spare underpants, two pairs of socks, a toothbrush and a spare T-shirt, which also functioned as a towel and finally a puzzle-magazine which co-functioned as toilet paper.
OK this might be a bit spartanic, one could bring a good book instead of a magazine :)
Backpackers insist on walking around with their giant luggage-pack from accomodation to accomodation and coming out of blue, they expect to be welcomed, for a cheap place to stay. Well, nowadays we have internet complete with independent guest reviews and low-cost voip calls to landlines to make reservations. And accomodations are using this system to make sure they are fully booked all year around. If backpackers are so lucky to find a room, but are not sure they like it, book for one night and see, if not up to your standards, book another the next morning or go there, but please leave your hideous bags in the room, to keep low profile in order not to disturb the local urban habitat. And by the way dreadlocks only look cool on Jamaicans.

Or is it that backpackers want to belong to a special group of people to be found in hostels worldwide? I met such veteran backpackers, they often find themselves very interesting; they seen everything, done everything, been everywhere. If you tell them what you experienced, they always have far more interesting stories to tell, but according to my opinion, despite their cosmopolitan attitude, they seem to wear invisible clamshells on the both side of their ears and eyes.
Posted by I-nomad at 01:57