Does size matter? I don't know, but some people are actually researching this. On the serious side part of research could have been financed by condom manufacturers and authorities dealing with HIV prevention.
The size on the index below is in cm's, measured in erect state. 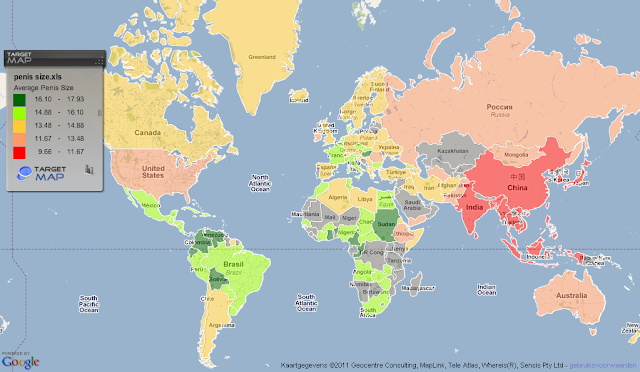 For all those interested in how well endowed men of various nations across the globe are, the map can be further explored here.
Data seems to come from this website, for which they used various sources. Also they even calculated the difference between self-reported and officially measured lengths, which depending on the country seemed to lack an inch or two.
Another map shows national IQ vs penis size, but what's the use? Once in the act, who's interested that mass equals energy and what do you need to know more about black holes if you already got one?

The above reminds me of a joke:
On a flight to Hawaii a man is taking place next to a beautiful woman.
He starts a conversation and asks wether she's on holiday or business, upon which she answers that she will attend a congress about sexology in Honolulu.
The man gets very curious and asks: "Tell me, do you know which people actually have the biggest penis?"
"Well", she answers;  "research showed that the Native Americans have the longest ones, but the Scottish have the largest girth (thickness).."
Later during the conversation she asks the man for his name, when he reaches out his hand and smilingly replies: "Hiawatha MacLeod, nice to meet you!".

If we have to take the above map for true; Congolese men have the longest ones, averaging 17.93cm/7" whereas South Korean men (and women) have to settle with a mere 9.66cm/3.8".
By the way Kim Jong-il refrained from participating.
Other maps like a global hapiness map and a worldwide map of nuclear power plants can be found at the website of targetmap.
Posted by I-nomad at 19:29