This morning after breakfast we walked a bit around when I came across fruit which looked like green apples hanging from an unfamiliar tree. Usually Polly can tell me the name of any plant we stumble upon, so I asked her what it was.
She answered that it was a 'Cannot eat fruit tree'. She further explained that the actual name of this tree was not that interesting because the fruit was inedible anyway.
Polly left me behind a bit puzzled when I later met a man who told me earlier he worked around there for over 10 years, so surely he would know, or so I thought. I got the same answer: "Cannot eat fruit". Then I almost started to believe it was forbidden fruit similar like Adam and Eve's apple tree.
It appeared to me that everybody around here is merely interested in edible things and that's quite a lot or so I have noticed. When whatching a documentary on Next Step channel (the Thai Nat Geo), we do see some strange animals and while trying to learn a bit more, Polly will often be able to tell me how good it tastes.
Rouseau already told that going back to nature is good for you and I suppose he should know. 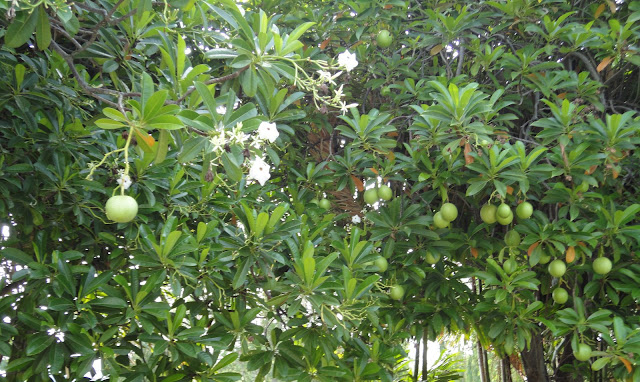 After more inquiry, I finally found out the tree is called  'Dad nam' (forgive my spelling), which translates to something like 'duck flipper water'. It's called this way since the leaves resemble flippers (with some imagination) and it grows near the water side. The tree belongs to the so-called dogbane family and is family of the oleander.
Posted by I-nomad at 11:03