In Roi Et and in fact in large parts of Thailand the typical means of private transportation for expats will be a pickup, scooter or motorbike.
Today I saw someone who formed an exception to the rule.
He told he bought the vehicle from a tuk-tuk driver for ฿15,000 (€338/$495).
Since many farangers in Isanistan value their privacy, I didn't want to bother the guy too much.
Yet it would be interesting to know how the locals react to his newly acquired curio.
I don't think folks around here, who almost invariably dream of owning a Mercedes or BMW, consider his alternative means of transport cool.
Still, I guess one could get a fair bit of attention value for money in the more densely populated expat hangouts of Thailand. 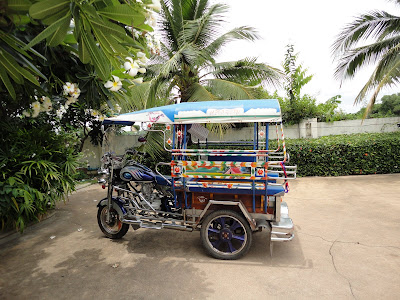 Update 7-6-2011: Heard at least 2 other foreigners permanently living or frequently visiting Roi Et are the proud owner of a tuk-tuk. The advantage is that it's a economic city vehicle, where it offers more space than say a Robin Reliant and can be used for shopping or going places with your family.
Should you really run out of funds, you could easily start a local taxi service as well.
Posted by I-nomad at 14:47