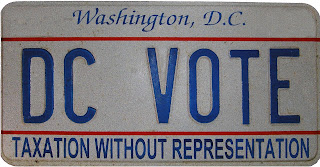 Forget the North African and Arab revolutions for a moment. Are you aware that right now 600,000 Americans are being deprived to exercize their current or future democratic rights? They haven't commited any crime, which would abort further equalitarianism in a dozen states or so.
Amazingly, all citizens of the country's metropole are not allowed to vote in the same way as the rest of the people in the 50 states are allowed to.
Washington DC has historically been declared an independent district which doesn't belong to any state, thereby rendering it impossible to be fairly represented in US congress, or at least up to now legislators treat their status apart this way.
The District of Columbia has become a kind of overseas colony like Puerto Rico or Guam which have no members in congress as well. Still, DC is fully under US authority, so people pay the same taxes but are deprived of exercizing all liberties as other Americans do.
Isn't it ironic that a country famous for post order deliveries of freedom and democracy to doorsteps all over the world since 1819 still doesn't grant the same courtecy to folks in their own capital for almost two centuries later to say the least?
A rally is planned coming June 25th.

When in DC, besides admiring it's grandeur, I recommend to listen to different points of view, for example by having a chat with the president's closest neighbour.
I love Washington DC, I really do and feel sympathetic toward the people's cause.
Let's hope the  populace find ways for tweeting, youtubing or facebooking their message out, bringing it on the agenda of the free world.
Posted by I-nomad at 15:18