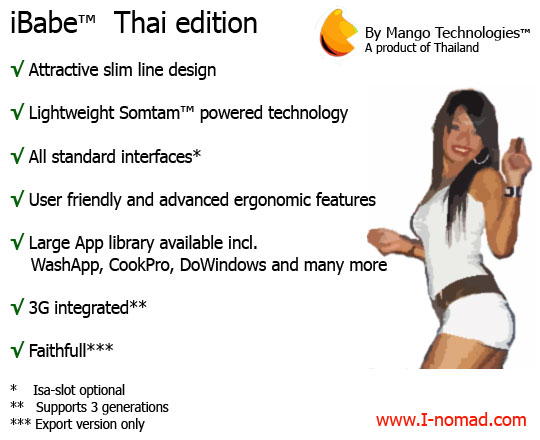 Although I learned English at school for six years and lived for about five years in Japan and Thailand, where I mainly use(d) English as well, it was a personal challenge to start blogging in English as opposed to my native language Dutch. Mistakes remain undetected much easier than using one's mother tongue. Also the choice of words and grammar would not be that sophisticated as blogs of native speakers, making it less attractive.
After 16 months, the advantages are clear; I'm now able to reach a much larger group and statistics show I get visitors from all over the world, which I prefer rather than having a (larger) Dutch reader base only.
By writing in English I noticed I got to know the language better, since in attempts to look a bit more professional I often look for translations and synonyms.
Also I don't specialise in niche blogging, since I'll elaborate on any subject which entertains or interests me, so quite possibly I'm my own biggest fan.
Today I came across this test, which estimated my vocabulary at 21,200 words, which for me seems quite a lot, but still remains on the low end of native speakers.
Naturally for me this is a good ego-booster, keep up the good work I-nomad, up to the 30,000 :).


Your total vocabulary size is estimated to be:


Link thanks to the Presurfer.
Posted by I-nomad at 19:40 0 comments

I once heard a story from an old man about a Dutch village in the begin of the 20th century.
In those days they did have electricity which was mainly used for light since there were not many other electrical things around the house like radio's or TV's. The electrician in the village was in charge of the generator and faithfully turned it on every morning at around 6 and turned it off at about 9 in the evening, since at these times the villagers were more or less supposed to wake up and go to bed.
The only exception was on Friday's, when he used to drink in the local pub and after a few beers wasn't too concerned about his job and turned the generator off after he finished drinking at 11 or later.
Almost everyone in the village knew when the electrician was in the pub, since they had some extra hours of light and so by the courtesy of the electrician they could stay up a bit longer as well.

Nowadays access to electricity belongs to basic human rights, however not everyone in the world takes that for granted.
Here on Coral Island the generator is turned off roughly between 9 and 12 in the morning and 3 and 6 in the afternoon. No wifi internet during these times, the only thing modern one can still enjoy is DTAC phone reception via a solar powered mast.
Most guests like to believe the cuts are done for ecological reasons, and some told me it made them feel closer connected to the environment, since you're more or less forced out of your room.
In fact only the eco-part is true, as far as it is used in the word economical. The bulk of the electricity is used for airconditioning and this measure cuts 25% of the fuel costs, where for idealists it contributes to a greener planet as well.
An exception is made on rainy days when people stay indoors, spend time watching TV or use internet in the lobby.
Another exception is when large groups of Chinese visit the resort, since according to some of the staff they seem to show little understanding towards the eco part.
Today we had no rain in the daytime nor any Chinese, but for unknown reasons power was only cut off for less than an hour in the morning.
So now, due to the courtesy of the island's 'electrician', I got some extra time to tell you this story.
Posted by I-nomad at 15:53 0 comments

Perhaps the box office hit Hangover II triggered some people to get married in Thailand
Here are some photo's of a privately held wedding on the secluded Coral Island:

For more information click here.
Posted by I-nomad at 12:44 4 comments

Even though some items might be bought on Phuket mainland, I'm not sure why I would never bring these to the island myself, but this way it kind of made my day.
Posted by I-nomad at 18:57 0 comments

Seen in a Thai-Swedish restaurant in Patong, Phuket: 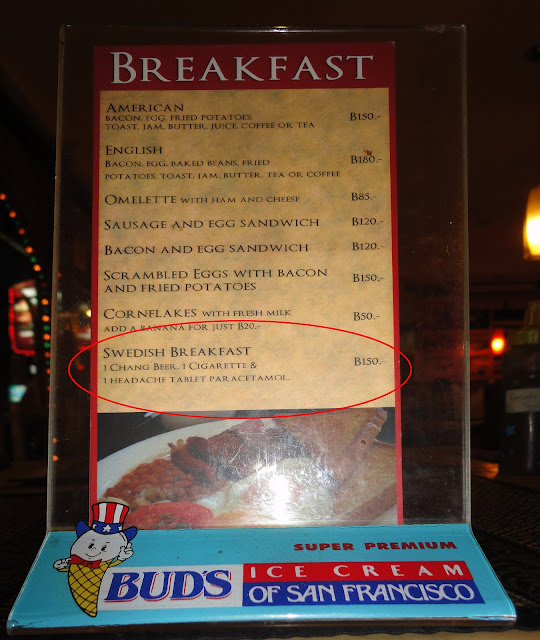 Seen in Patong, Phuket:
Sponsorship from Singha Beer.
I'm not really sure if the're doing sensible marketing this way: 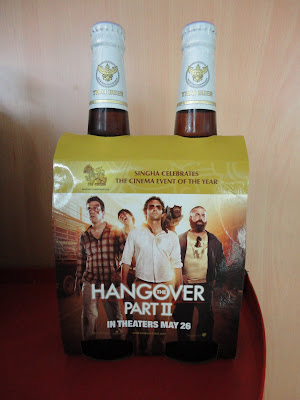 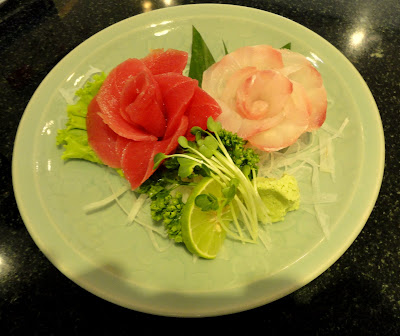 The objects you see below are made from plastic drinking straws, which are cut open, sliced and folded into triangular pieces (mathematically called double tetrahedra, but forget about that). The pieces are then sewn together into different objects like hearts, fish, butterflies, etc. 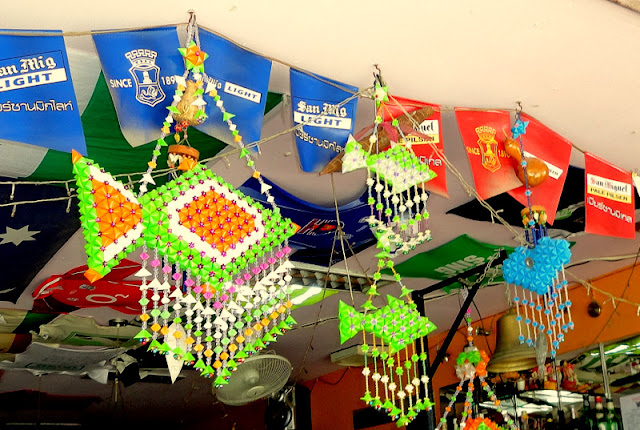 Just to see what it would look like, I made a custom order last week.
After sketching up the design, two girls needed five days to finish it: 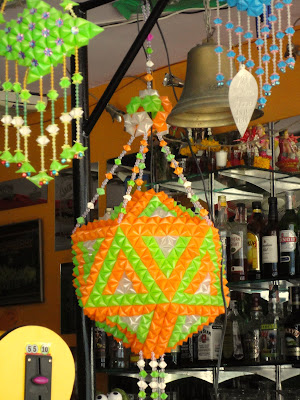 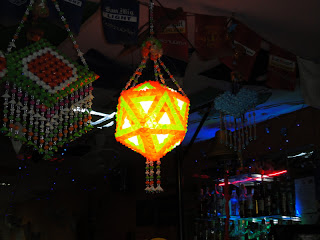 Actually it turned out to be a bit of a kitsch lamp.
Even if I would like to, I have no space in my suitcase to bring it, so it's now hanging in the shop.
Posted by I-nomad at 15:46 8 comments

Seen in Patong, Phuket:
Suppose you own two hotels in the same street, both with a massage and beauty salon.
You decide to call the first salon: HI-SO.
So far all up to standards.. 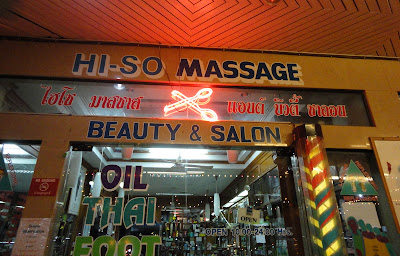 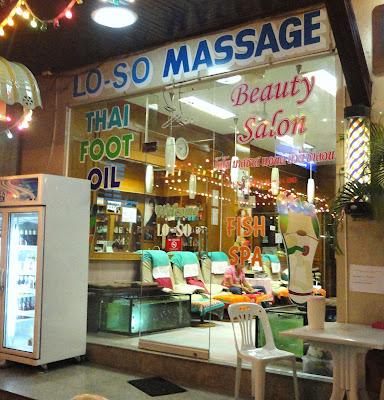 From the Futility Closet:


Posted in Puzzles by Greg Ross on June 30th, 2011
An urn contains 75 white balls and 150 black ones. A pile of black ones is also available.
The following two-step operation occurs repeatedly. First we withdraw two balls at random from the urn, then:
Because the urn loses a ball at each step, eventually it will contain a single ball. What color is that ball?
I will give the answer tomorrow.
I like these kind of riddles, Greg will post his answer tomorrow, meanwhile if you have no clue, see my guess here.
Posted by I-nomad at 23:14 0 comments