The poor woman with the blind singing husband 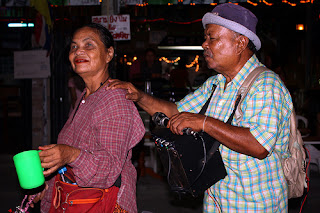 Now that the poor man with the elephant or the man with the poor elephant is more or less being banned from Thai streetviews, another profitable franchise concept has emerged.
The poor woman with the blind singing husband.
For those unaware: A woman with a collection cup is being followed by her blind husband holding her shoulder while he's singing through a little portable karaoke portable set.
They will stop at every bar or restaurant to cash in on their effort.
Actually I first thought it was the same couple stalking us on our journeys through Thailand, since the act looks so alike, but they are simply all over the place. So, similarily to the many South American Pan flutist groups in Europe playing the same tunes, I had to drop that idea.
Actually the husband is not only blind, he must be deaf too, since without exception he will utter false and unmelodious sounds, invariably with the volume wide open.
This sound which cannot be called music by any standard causes a feeling of misplaced embarrassment to the unfortunate onlookers. In fact the couple hijacks your heart, since non-cooperation, let alone protest would look pitiless. The woman will continue to look pathetic while her husband taunts the ears untill a compromise is reached. If not enough people are willing to pay the ransom, the owner of the establishment will finally handover the remainder of the f*ck off money out of own pocket. Apart that it looks good to Buddha, the're used to overcome these moments of despair by boldy paying as if it was paying protection fee to the police. So next time if you recognise the sound, which is a no-brainer, just duck and cover.
Similarly to begging women on the streets of Bangkok who rent baby's to get larger turnovers, I wonder if there's a place for women to rent blind men who cannot sing. Or are the men just acting?
If not, wouldn't they not be better off with a guide-dog, since at the same time the wife could collect extra money in other ways, but the drill to stop at every crowded place and to continue after extorting enough cash would require months of expensive training for the dog, so it's probably not worthwhile.
From the looks, I'm pretty sure the couples must at least have had a basic training course and a starters-kit from somewhere.
Anyway, it's probably just another effective money making scheme from a Thai exploitation through despair syndicate.
On to the poor man and his blind singing wife.
Posted by I-nomad at 18:16