Where the streets have no name

Seen in Ao Nang, Krabi; Mr. Long bar and restaurant.
The spot is a bit hard to find, since it's situated on a dirt road, which has no official name and as far as I know is just being referred to as Soi Bamboo or just bamboo bars.
The road which is a side street of Airport Road, opposite of Vogue resort and spa, accommodates about 10 bars and is one of the three main area's where Ao Nang's miniature night live is going on.
The owner mr. Long, sometimes nicknamed Jack Sparrow, used to own a restaurant in Bangkok, but moved to the more relaxing atmosphere of Ao Nang.
Like most locale in the street it is fully made of wood and bamboo, everything constructed by own design. Reggae is the prevalent choise of music here.
A specialty of mr. Long is the production of tequilla, a skill which runs in the family for three generations.
Mr. Long's grandfarther, who started destilling the beverage more than a century ago, became 99 years. Time enough to perfect the recipe, I guess.
Usually tequilla is made from agave, a plant which only grows in Mexico.
According to mr. Long, his drink is made from palm sugar, so I could hardly believe it would share any resemblance with the original drink. Surprisingly it did, the taste being somewhat smoother than your average tequilla.
The price is 80 Baht (€1.91 / $2.64) per shot, not that cheap for 'bootleg', but usually mr. Long will give out a couple of free shots once you're there. 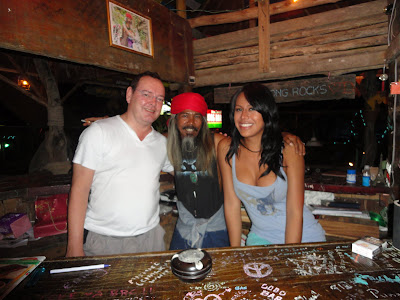 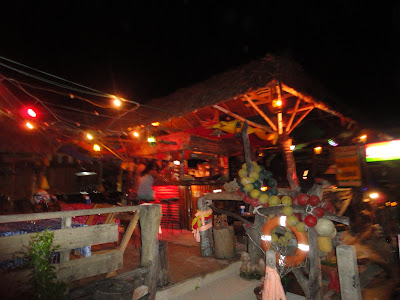