Do I need to turn off my cell phone during lightning? 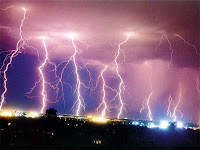 In case of lightning, lots of people disconnect their TV and other home equipment from the mains and other outlets like cable,  to safeguard them from breaking down. Since many homes don't have surge protectors everywhere, it's the right thing to do, since if the lightning hits a power line nearby a high voltage spike will get in the mains and do it's destructive work. In Thailand lot's of people turn their cell phone off too, since it's an electric/electronic device. Is their any need to do so? I have had some arguments with Polly, who insisted on doing this. Since I don't like false feelings of safety, here are some more details I came across.
Lightning is the discharge of static electricity from highly charged clouds in comparison to the neutrally charged earth.
If the difference in charge becomes too high, air, preferable humid air will become a conductor which guides the discharge. Since many objects near the ground have a higher conductivity than air, lightning will find its the way of least resistance.
Cell phones are usually located in your pocket, handbag or near your face when calling..
Devices which run on batteries have a neutral charge regardless of turning them on or off, but are not connected to the earth like TV's via the electric plug.
Cell phones however do contain metal parts which could be dangerous, since if held nearby these parts form a conductor which could guide electricity to your body, if this would happen it would leave in the best case nasty burn wounds.
Although I'm not sure this custom still exists, interestingly enough in Isan, North-East Thailand, casualties of lightning used to be burried standing up with a metal pan on the head, instead of being cremated. Only older people who died from natural causes were cremated, but this custom has changed over time.

Back to the main topic, the advice is:
- No, there's no need to turn off your cell phone during lightning. If needed, use your time for other safety precautions
- In the safety of your home or (closed!) car, use of your cell phone would be a low risk issue.
- When outdoors don't keep your cell-phone near your body, regardless whether it's on or off.
- More importantly, don't call outdoors!
- Half an hour after the last strike, use of your phone is generally considered safe.
Posted by I-nomad at 08:18