The moral of the Three Little Pigs doesn't always apply.. 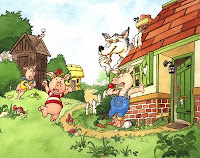 Today we joined a friend visiting her parents mr. and mrs. Yib in Bang Ntort 30 km's from Siem Reap. The last 2 km's was a bumby sand-road and we had grab on to anything in the tuk-tuk in order not to be ejected from the vehicle.
We brought food and Polly helped to prepare it with the family.
Their living conditions were minimal; a low open living-room with a sand floor situated under the bedrooms made of thatched palm leaves. The space was roughly 4 by 5 meter and was lacking electricity, running water, toilet and sewage. I wondered how they raised 11 children there.
I didn't eat that much, not that I didn't like the food, but since I was a bit on the runs, the prospect of going to the forest which is the common bathroom for most of the villagers was not  very appealing.
As for sanitary conditions, I heard that an old local saying goes: Wake up early and you can stay near your home, wake up late and you'll have to walk far away [To do your thing and wash yourself].

Conditions for the family Yib had not always been that bad. Before 1975 mr. Yib was a surgeon in a Siem Reap hospital, while his wife used to be a French teacher. They lead a relatively comfortable life.
During the Pol Pot regime they were under threat to be regarded as intellectuals where as a result they would have been killled. Mr. Yib and his family managed to escape prosecution by burning all their papers. They were forced to leave the city and become farmers in an agricultural commune. Poll Pot declared it was the year zero. Money was abolished. Newspapers, television, radio, mail, means of transport including bicycles were abolished. The Khmer Rouge shut down businesses and stopped the use of money. Education, health care, religion, foreign languages and parental authority were done away with. Fear was felt everywhere. One could get killed for being cheerful. There were outbreaks of malaria and starvation was high. A human life had less value than a bullet. Cambodia had become a giant concentration camp.
After the ultimate terror regime finally got defeated by Vietnam in 1978 and having one son killed, mr. Yib and mrs. Yib decided to remain more or less self-supporting farmers independent from any government like they had done in their civil servant life before.

In the temple of Wat Taryak nearby, bloodstains of adults and children who had been slashed to death are silent witnesses which should give anybody second thoughts about what madness some governments can cause, not to mention the trauma's which left people disabled to pick up their old job again.
Although mr. Yib once seemed to have mastered fluent English and French, he never talked during our stay.
Mrs. Yib seemed more cheerful but spoke only in Khmer, no French. Their daughter told us that they both had forgotten their foreign languages. I found it hard to believe, but now writing this story I start to understand that I can only grasp a tiny fraction of the gruesome reality then. Total fear, total trauma.

The madness did not only apply to Cambodia or Pol Pot at the time. Not only did China, Thailand and the Western world lead by the US and the UK closed their eyes to the atrocities, but were in fact instrumental in the rise and duration of the Khmer Rouge's power.
A generally accepted viewpoint except for the countries involved is that all collaborated with the Khmer Rouge to fight archenemy Vietnam.
So the Vietnam / Indochina War part III (incorporating the French-Vietnam war) is a new sequel which lasted 18 years.
Following are known examples of support and opportunities given to the Khmer Rouge by the West.

a) Extensive US bombing of Cambodia during and after withdrawal from Vietnam drove orphans and frightened people into the hands of the Khmer Rouge which had a mere 3,000 members before the bombings. The official motive was that the US was preventing the Vietcong army crossing the border.
The CIA estimates that during 3,530 flights, which were at the time strictly being kept secret, US bombing killed 600,000 Cambodians and caused 2 million refugees. Cambodia which neutrality had been guaranteed by the Geneva Accord of 1954 has secretly undergone the most extensive bombing of any country in history.

b) The genocide carried out by the Red Khmer lasted 3 years and 8 months was at the time also fully being kept secret to the media.
According to estimates a minimum of 1.7 million people died in this period. Other estimates mention 2 till 2.5 million casualties. For nearly 12 years the US refused to acknowledge the event. The fact that in less than four years one out of every four Cambodian dissapeared from the face of the earth had appearantly gone unnoticed by a nation with the world's most sophisticated intelligence agency is extremely doubtful to say the least.

c) Alleged training of Red Khmer soldier given by the British SAS, after the army retreated to the Thai-Cambodian border the US supported Pol Pot and his army financially. At this time Pol Pot was accomodated in a plantation villa near the Thai province capitol Trat, protected by a special Thai military unit.

d) The UN accepted the Khmer Rouge as the legimate government of Cambodia for a period of 15 years after the Pol Pot's genocide took place and the Vietnamese took over. During this time the Khmer Rouge could freely endulge in guerilla warfare.
Some estimate that during this time at least half a million more people starved to death or were slaughtered.


Later that day I passed various other houses in the surrounding area and it occured to me that for many the story of the Three Little Pigs must sound rather sinister.
The moral of the story is that when you're smart and work hard will yield to results simply does not apply to everyone.
To create equal opportunities, in the story the little pigs got their building materials from people they happened to meet for free.
Naturally this is not the case in the real world. In Cambodia 80% of the people live in rural areas and 30% of the population lives under the national poverty line of $1.25 a day (Stats 2007). Or in other words this doesn't buy you many bricks.
In the original story only one pig survives and the bad wolf gets what he deserves and dies, whereas the only person from the Khmer Rouge who has been convicted is Kang Kek Lev a former prison boss. His sentence was 35 years enprisonment, but he got a pre-trial detention reduction of 11 years and furthermore a much disputed 5 years reduction due to an exceeded lawful maximum pre-trial detention, resulting in 19 years sentence.
Three other officials are still on trial.
How Pol Pot died is not sure, coincidentally it was just after the Khmer Rouge agreed to turn him over to an international tribunal. He was cremated before any official inspection for traces of suicide or poisoning could take place. Likely he knew too much about his henchmen.
Anyway it happened in his bed in similar poor housing conditions many Cambodians are still living in.
The big bad wolf has died, but gross injustice and evil secret agenda's still remain.
18 years later the country still hasn't recovered from the after effects of long term international aided terror.