Seen in Siem Reap at the central market:

Frogs are not just for the French. Many east Asians are fond of the delicacy too.
And then there is a bunch of adventurous Western travelers who dare to probe some local exotic snacks.
With a mixture of curiousity and plain bravura, photo evidence placed on Facebook is bound to get some comments and perhaps even a few likes.
Reportedly a few months ago, after the open air BBQ of King Pub Street restaurant started to advertise the ceased to be amphibians as Sexy Frogs, sales boosted. 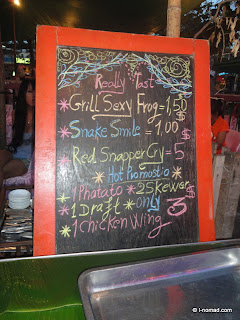 The continuous question from curious passers by is of course: "Why are they called sexy?" 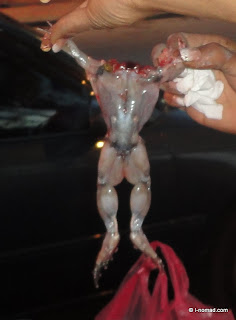 You might have guessed; the photo above shows enough nudity suitable for wok.
In the mean time the meat display of the BBQ has become a popular spot for a holiday snap.
25 years old waitress Sophea who came up with the idea deserves a raise, since without any schooling after age 11, she figured out the AIDA principle of marketing, namely: Attention-Interest-Desire-Action. 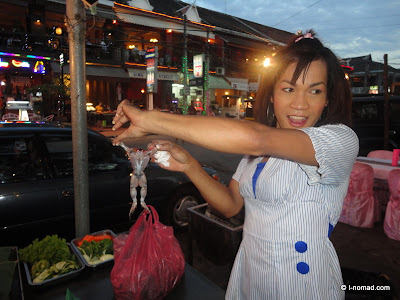 Perhaps the fact that Sophea is a ladyboy is a pro in creative marketing. (Think different, Steve Jobs said.)
Now she needs to figure out something for the grilled snakes. 'Snake Smile' is just not interesting enough or is it?
Posted by I-nomad at 19:08